The Handwriting On The Wall: How Great Civilizations Fall

Suddenly, a ghostly hand appeared in front of everyone to write on the wall of the palace banquet hall. It was a message of judgment for a people who were godless in their behaviors. As they drank from cups dedicated to God’s service, the irony was that sin’s work of dissipation had filled the cup of their lives and was overflowing. The hand writing upon the wall was God’s own, saying, “Mene, mene, tekel, upharsin” – meaning “numbered, numbered, weighed in the balances and found wanting; your kingdom is gone.” Before that very night would end, King Cyrus of Persia would attack Babylon; Belshazzar would be slain, and Darius given the kingdom. The truths of this story are self-evident for our own time. To trifle with God, who is sovereign over the nations, is to invite disaster.

Scientists Close In On Growing Human Clones In Artificial Wombs

Inside what look like oversized ziplock bags strewn with tubes of blood and fluid, eight fetal lambs continued to develop — much like they would have inside their mothers. Over four weeks, their lungs and brains grew, they sprouted wool, opened their eyes, wriggled around, and learned to swallow, according to a new study that takes the first step toward an artificial womb. One day, this device could help to bring premature human babies to term outside the uterus — but right now, it has only been tested on sheep. It’s appealing to imagine a world where artificial wombs grow babies, eliminating the health risk of pregnancy. Of course, lambs aren’t humans — and their brains develop at a somewhat different pace. The authors acknowledge that it’s going to take more research into the science and safety of this device before it can be used on human babies.

“Given the broad distribution, low cost, and accelerated pace of development of this dual-use [genetic engineering] technology, its deliberate or unintentional misuse might lead to far-reaching economic and national security implications,” an annual worldwide threat assessment report from the Central Intelligence Agency, the National Security Agency, and half a dozen other U.S. spy and fact-gathering operations said last year. Also last year, genome editing was added to the list of national security threats for the first time. Last year’s report noted that new discoveries “move easily in the globalized economy, as do personnel with the scientific expertise to design and use them,” and pointed out the possibility of using the cutting-edge gene-editing technique CRISPR to edit the DNA of human embryos [as
described in the documentary INHUMAN]…

Siri co-founder and Apple product designer Tom Gruber envisions a future much like Black Mirror, where artificial intelligence augments human memories so we never forget anything again. ‘Superhuman abilities’ brought about by AI are ‘inevitable,’ Gruber said at TED2017 today, allowing us to remember every name and song ever heard, or everything we’ve ever read. The expert argues that AI will work with humans – not against, as many have feared – to allow us to overcome our limitations. But, not everyone is so optimistic about the future of artificial intelligence. According to John McAfee, AI is a ‘self-conscious entity’ that is inherently self-interested, which could give rise to conflict with the human species. The cybersecurity expert argues that any system created by humans would be flawed by nature – and, ultimately, the AI’s goal would include the ‘necessary destruction of its creator.

Ridley Scott: CLOUDEATER Aliens Exist, And They Are Coming For Us

The veteran filmmaker is preparing to release the sixth film in the Alien sci-fi horror series, Alien: Covenant, next month. He said: “I believe in superior beings. I think it is certainly likely. An expert I was talking to at NASA said to me ‘have you ever looked in the sky at night? You mean to tell me we are it?’ That’s ridiculous. The experts have now put a number on it having assessed what is out there. They say that there are between 100 and 200 entities that could be having a similar evolution to us right now. So when you see a big thing in the sky, run for it. Because they are a lot smarter than we are, and if you are stupid enough to challenge them you will be taken out in three seconds.”

For the most part, most Christians have paid scant attention to the implications of this technological revolution—and of the transhumanist ideology parallel to it, says Douglas Estes, a theology professor at South University with a lifelong interest in science. “It seems to me that the biggest misunderstanding of Christians for transhumanism is that they think that it’s just science fiction, that’s it’s some crazed scientist idea that is never going to happen.” said Estes, pointing to Captain America as an example. “I think that dismissing this issue would be a huge mistake for us because it would not allow Christians to engage in this issue.” Estes joined assistant editor Morgan Lee and editor-in-chief Mark Galli on Quick to Listen to discuss just how fast technology is changing, why Christians may be willing to genetically modify their children, and the best way to understand transhumanism…

(Natural News) A recent survey published by the Morning Consult noted that more than half of all Americans – 51 percent – say that national political media “is out of touch with everyday Americans,” while just 28 percent – not even one-in-three – said the same media “understands the issues everyday Americans are facing.”

The United Methodist Church Judicial Council ruled lesbian, gay, transgender and bisexual members could not be consecrated as clergy. The ruling came after married lesbian…

A new report says that violent attacks on the Christian minority in India are increasing at an alarming rate, as the emboldened members of groups…

This is what a superstorm looks like! A very large, powerful storm system is forming over the United States stretching from New York all the…

A San Francisco federal court has heard evidence about how Monsanto routinely hires armies of trolls to combat negative posts about them online. According to plaintiffs, the GMO giant hired third-parties to respond to negative online comments […]

Kim Jong-un has warned Israel that North Korea will obliterate them if they continue to destabilize the Middle East.

Jong-un accused Israel of being the only Middle East nation to illegally possess nuclear weapons with the blessing of the United States.

The comments come after Israeli Defence Minister Avigdor Liberman accused Jong-un of being a “madman” and part of an “insane and radical” gang alongside Iran and Syria.

A California-based pet food company has been caught using recycled pets as cheap protein in its popular dog food. Party Animals is recalling two lots from its line of Cocolicious dog foods after cans in […] 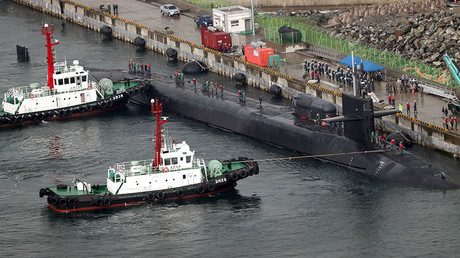 North Korea has promised to sink a US submarine currently deployed in South Korean waters if the Americans take provocative action. The statement comes shortly after Donald Trump said he won’t be “happy” if Pyongyang conducts another nuclear test.

Coming to a City Near You? Halal Mcdonalds Fast Food with Arabic Coupons?

Now Sweden..Next the World? Seeing the burgeoning populations of muslim integration…unchecked by laws governing marriage the population explosion of polygamy is outpacing many countrys. McDonald’s in the city of Södertälje in the country…

by Mark Angelides What appears to be the beginning of a coup is underway in Macedonia. Masked men have stormed into Parliament and are holding both journalists and MPs. But this is a very..

A Satanic Gang Is Being Protected By Sanctuary Cities, As Americans Are Terrified And Savagely Murdered In The Sanctity Of Their Own Homes.

by Pamela Williams As President Trump makes headway in eliminating ISIS, another brutal gang called MS-13 has raised its ugly head in the “sanctuary cities” of America. These cities will hide these gangs and offer

Europe: What Happens to Christians There Will Come Here

Italian neurosurgeon Sergio Canavero made headlines around the world two years ago with the bold claim that he would soon be stitching one person’s head onto another’s body.

Despite the numerous obstacles Canavero faces from ethical and scientific standpoints, he appears to be moving full-steam ahead. Last year, he performed what he called a "proof-of-concept" procedure in which he severed a dog’s spinal cord then reconnected it — one of the major obstacles to completing the procedure in people.

And now Canavero has published another equally repellant study that details how he and another surgeon, Xiaoping Ren, attached the head of a mouse to the body of a rat. The team then repeated the procedure in several other animals, effectively creating a series of two-headed rats.

Ten reasons millennials are backing away from God and Christianity

College-aged millennials today are far more likely than the general population to be religiously unaffiliated. This is true when they are compared to previous generations as well.

In fact, the Pew Research Center documents that millennials are the least outwardly religious American generation, where “one in four are unaffiliated with any religion, far more than the share of older adults when they were ages 18 to 29.”

Just over 60 percent of millennials say that Christianity is “judgmental,” and 64 percent say that “anti-gay” best describes most churches today.

In ministry circles, it has long been reported that of youth raised in homes that were to some degree “Christian,” roughly three-quarters will jettison that faith after high school. Just under half of this number will return to some level of church involvement in their late 20s or early 30s.

It has long been recognized that experience with an earthly father deeply informs the perspective about the heavenly father. In “How the West Really Lost God,” sociologist Mary Eberstadt correctly asserts, “The fortunes of religion rise or fall with the state of the family.”

THANKS, OBAMA, your Somali Muslim freeloaders are giving America something back in return: MEASLES & other diseases

The measles outbreak within Minnesota’s Somali community continues to spread to more parts of the state. “Officials believe it was imported by a traveler or immigrant from a foreign country, since measles no longer occurs naturally in the United States,” the Star Tribune reports.

Breitbart Late Friday, the Minnesota Department of Health (MDH) announced that the total number of cases has now grown to 32, and “28 of the cases are Somali Minnesotan.” The MDH has not yet announced the demographic characteristics of the other four cases that have been diagnosed as part of the outbreak.