Blizzard & Storm
That is amazing! Right now, a monster storm is bringing HURRICANE force winds – 90 to 100 mph – to the Central and Eastern Aleutians. And this powerful Bering Sea storm underwent a crazy BOMBOGENESIS…

The United States warned the North Korean leadership that it would be "utterly destroyed" if war were to break out, after Pyongyang test fired its most advanced intercontinental ballistic missile, putting the US mainland within range.

The Trump administration has repeatedly said all options were on the table in dealing with North Korea’s ballistic and nuclear weapons program, including military ones, but that it still prefers a diplomatic option.

"We have never sought war with North Korea, and still today we do not seek it. If war does come, it will be because of continued acts of aggression like we witnessed yesterday … And if war comes, make no mistake, the North Korean regime will be utterly destroyed."

A number of mortar shells were fired from the Gaza Strip at nearby Israeli troops, and in response Israeli tanks and aircraft targeted four Hamas positions in northern Gaza, the army said.

There were no Israeli injuries reported.

The exchange came exactly one month after Israeli forces destroyed an attack tunnel belonging to the Palestinian Islamic Jihad group, in which at least 14 terrorists were killed, including two of the organization’s top commanders.

An army official said the mortar barrage appeared to be a retaliation for the demoltion of the tunnel, which stretched from the Gaza Strip into Israeli territory, near Kibbutz Kissufim.

In mere months, China will have a ballistic missile completed and ready to strike anywhere in the world in 30 minutes. And it can carry up to ten nuclear warheads.

Geophysicists who studied seismic activity over the past 117 years report 2018 could be shaping up as a year of monster earthquakes – especially around the equator.

(Natural News) My mother never liked me playing with Barbie dolls as a girl. She felt they were too sexualized for a 5-year-old. My grandmother thought she was nuts. Turns out, Mom was right. (Article by Susan L.M. Goldberg republished from PJMedia.com) Not only does Barbie have an Instagram account, Mattel contracts with designers to … [Read More…]

(Natural News) Besides destroying America, one of the things that the liberals have become fairly good at is taking advantage of Hollywood and childhood icons in order to advance their radical social justice agenda. It is a very sneaky way of promoting their deranged values and principles, similar to how companies use product placement to … [Read More…]

Amazon’s ALEXA is a pseudoscience quack: Declares gender is a “spectrum”

(Natural News) Having an always-listening, always-connected spy device like Amazon’s Alexa in your home that creates grocery lists, conducts internet searches, and even turns on and off lights just by speaking at it might seem cool to "techies" who are willing to sacrifice their privacy in exchange for the illusion of convenience. But … [Read More…]

(Natural News) Most of us have to do things we’d rather not for our jobs once in a while. Whether it’s smiling in the face of a boss or customer we vehemently disagree with or participating in boring conference calls, we chalk it up to being “part of the job” and appreciate the fact that we’re employed in the first place.

The black population is in decline: 3 out of every 4 abortions in America are black babies — more than double that of whites

(Natural News) There is a silent holocaust taking place in America today. Quietly, and without any sort of fanfare from the mainstream media, an entire segment of our population is being exterminated. While the rest of the media maintains a deafening silence, Mike Adams, the Health Ranger, has risked his life and put his professional … [Read More…]

Brown University is implementing a change to its graduate school application that will allow applicants to “self-identify” as persons of color. Multiple efforts by The College Fix to clarify the details of this change were ignored by campus officials. The policy comes as a result of complaints made by graduate students on the Graduate School advisory board that international and Asian American students are not

treated as members of historically underrepresented groups by the university, according to The Brown Daily Herald. One graduate student, Lydia Kelow-Bennett, told The Herald that this decision has led to “institutional invisibility” for these students. Brown defines historically underrepresented groups as “American Indian, Alaskan Native, African American, Hispanic or Latinx and Native Hawaiian and/or Pacific Islander.

Researchers have found an imbalance in the brain chemistry of young people addicted to smartphones and the internet, according to a study presented today at the annual meeting of the Radiological Society of North America (RSNA). According to a recent Pew Research Center study, 46 percent of Americans say they could not live without their smartphones. While this sentiment is clearly hyperbole, more and

more people are becoming increasingly dependent on smartphones and other portable electronic devices for news, information, games, and even the occasional phone call. Along with a growing concern that young people, in particular, may be spending too much time staring into their phones instead of interacting with others, come questions as to the immediate effects on the brain and the possible long-term consequences of such habits.

its 285,000 Facebook friends that this Christmas season customers could expect to find in their stores a special rainbow-colored “Zipfelmann” (“Tip-Man”) in a show of solidarity with the LGBT movement. Instead of the classical Santa Claus, or Weihnachtsmann, several years ago Penny supermarkets introduced their alternative Zipfelmann, which already had customers wondering whether this was the store’s way of undercutting Christmas

University demands people be warned about seeing a cross

World War II servicemen barely out of high school were buried under crosses as were troops who served in Korea and Vietnam. But now, one American university says that just seeing crosses can cause “emotional trauma.” That’s the subject of a new lawsuit by the Alliance Defending Freedom over a demand from Miami University of Ohio that pro-life students post warnings about their display of small crosses in the ground.

“No university official has the authority to censor student speech simply because of how someone might respond to it,” said ADF Legal Counsel Travis Barham. “Like all government officials, public university administrators have an obligation to respect students’ free speech rights. “The First Amendment secures the freedom of all students to participate in the marketplace of ideas, and it prohibits university officials from imposing trigger warnings that restrict what some students can say to spare the feelings of others.

A NASA researcher has released video evidence proving that the International Space Station (ISS) is actually filmed in a studio on earth, and not in space. The video vindicates conspiracy theorists who claim that NASA […]

Iran is sending a fleet of warships to the Atlantic Ocean where they are expected to sit just outside of the U.S. border.

Iranian military leaders announced Tuesday that they intend to solidify ties with several Latin America states, as well as send a strong, defiant message to the USA.

According to the commander of Iran’s Navy, there is a renewed sense of focus with regards to displaying military force in international waters, as fears grow that World War 3 is on the horizon.

Jpost.com reports: “Our fleet of warships will be sent to the Atlantic Ocean in the near future and will visit one of the friendly states in South America and the Gulf of Mexico,” Iranian Navy Commander Rear Admiral Hossein Khanzadi was quoted by Iran’s semi-official Tasnim News Agency as saying.

Mel Gibson: Hollywood Is ‘Den Of Parasites’ Who ‘Feast On Blood Of Kids’ 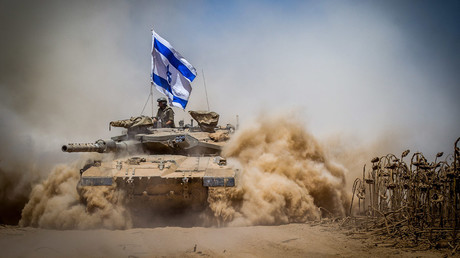 The Israel Defense Forces (IDF) have staged an attack on Hamas positions in the Gaza Strip, using tanks and fighter jets, local media report. The IDF claims it is retaliation for a mortar shelling of an Israeli outpost by another militant group.

Saudis Fed Up: "Palestinians Milking Us for Decades"

The bitter fruit of a destructive generation.

The explosion of sexual harassment and assault claims, some going back forty years, is the inevitable consequence of the sexual revolution. Long before Bill Clinton’s sordid sexual escapades led him to impeachment, our culture had normalized public sexual behavior and mores once hidden away in the private realm, and kept there by laws, morals, and customs. Like many of our social pathologies today, our sexually saturated public culture and the unleashing of sexual predators are the bitter fruit of the free love movement of the Sixties.

Those who didn’t live through that period cannot imagine how quickly and radically our society was transformed. And that change was encouraged by certain species of dubious Pop-Freudian psychological ideas that had been combined with left-wing theories of political revolution. This synthesis was predicated on the delegitimization of the “bourgeois” virtues, morals, and values that had created the “false consciousness” empowering capitalist oppression. “If it feels good, do it” and “Fuck authority” became the most important personal and political imperatives.

Thus sexual liberation became an instrument of political “liberation,” and both revolutions enabled personal liberation, a weird mash-up of radical individualism and communist collectivism. Listen to Herbert Marcuse, denizen of the Frankfurt School and guru of the New Left:

The civilized morality is reversed by harmonizing instinctual freedom and order: liberated from the tyranny of repressive reason, the instincts tend toward free and lasting existential relations––they generate a new reality principle.

Author and research scientist Dr. James Lyons-Weiler, PhD, is concerned about doctors and Child Protective Services overruling parents who choose not to vaccinate.

In a video livestreamed on the Facebook VAXXED page on the evening of Tuesday, November 28, 2017, he said:

In the United States, there is a new rash of what can only be called Medical Kidnap.

He cites stories which are typical of those we have covered at Health Impact News, such as the medical kidnapping of a newborn just a few days ago in Idaho after theparents refused vaccines.

ITALY: A town with just seven residents is forced to accept at least 80 African Muslim invaders. What could possibly go wrong?

The tiny Italian town of Vaccarozzi di Erbezzo officially has only seven residents, but has been told by Italian authorities that it will be receiving 80 illegal alien African Muslim invaders. 26 African freeloaders posing as asylum seekers have already arrived as part of a government resettlement program. And the small town, rightfully, is dreading the influx […]