Russia and Iran have cooperated to keep Bashar Assad in power in the face of a civil war, and Iran is hoping to expand its military capabilities across Syria to its terrorist proxies in Lebanon. (AP Photo/Alexander Zemlianichenko)

"They are there at the Syrian government’s request to resolve issues that the Syrian people have been facing," Iranian deputy foreign minister Jaberi Ansari said Tuesday.

Russia and Iran have cooperated to keep Assad in power in the face of a civil war, and Iran is hoping to expand its military capabilities across Syria to its terrorist proxies in Lebanon. Ansari is in Sochi, Russia for a diplomatic summit on a political settlement to the crisis. Syrian opposition leaders and the United States declined to attend, preferring a United Nations-led process, but NATO ally Turkey joined the event.

Defense Minister Avigdor Liberman during a ceremony for the Jewish holiday of Tu Bishvat in Kibbutz Kfar Aza, in southern Israel, January 31, 2018. (Flash90)

Defense Minister Avigdor Liberman said Wednesday that should war erupt again with Lebanon, Beirut will “pay the full price” for Iran’s entrenchment in the country.

Speaking at an annual conference held by Tel Aviv University’s Institute for National Security Studies, Liberman said that Lebanon will be held to account in a future war because, led by the terrorist Hezbollah group, it has “sacrificed its national interests by subjugating fully to Iran.”

“Lebanon’s army and Hezbollah are the same — they will all pay the full price in the event of an escalation,” Liberman said. “If a conflict does break out in the north, ‘boots on the ground’ remains an option. We won’t allow scenes like in 2006, where we saw citizens of Beirut on the beach while Israelis in Tel Aviv sat in shelters.”

Artificial Intelligence Is The Weapon Of The Next Cold War

Just like the the Cold War in the 1940s and 1950s, each side has reason to fear its opponent gaining a technological upper hand.

How Can It Be Right To Kill 20-Week-Old Babies In The Womb?

It is almost unimaginable that 46 senators would vote against the Pain-Capable Unborn Child Protection Act. But that’s just what happened, with two Republicans joining 44 Democrats to cast their truly vile vote.

RUMORS OF WAR: Is There A War Brewing Between Israel And Lebanon?

Lebanon was warned recently by Israeli spokesperson and Israel Defense Force Brig. Gen. Ronen Manelis that war could break out between the two countries if Iran continues its development of precision missiles within Lebanon. Manelis blames the Lebanese government and the “blind eye” of some in the international community who have stood by and watched as Hezbollah, the political and

militant arm of the Shiite Islamist political party based in Lebanon, has built an arsenal within the country. “Lebanon has become – both by its own actions and omissions and by a blind eye from many members of the international community – one large missile factory,” Manelis wrote. He went on to add that Iran is no longer just funding Hezbollah in Iran’s quest to destroy Israel but rather Iran is “now here.”

Hawaii Govt. Official: The Missile Alert Was Based On ‘Real Threat’

A Hawaii government official has told reporters that the ballistic missile alert was sent to the public because “an actual attack was imminent.” According to U.S. regulators investigating the incident, the Hawaii employee who sounded […]

A renowned scientist claims that a human-chimpanzee hybrid was born in a Florida lab 100 years ago before being killed by alarmed doctors. According to psychologist Gordon Gallup, the world’s first “humanzee” baby boy was created in […]

A bombshell new study published in PNAS (Proceedings of the National Academy of Science) has found that people are 6.3 times more likely to infect others with the influenza virus if they have received a flu shot.

The provocative study detected that subjects who received the dangerous vaccine had abnormally high levels of aerosol shredding of flu virus particles – placing those around them at risk.

Greenmedinfo.com reports: The study found that flu carriers exhale significant quantities of infectious influenza virus, and that counterintuitively, sneezing is rare and not important for influenza virus aerosolization; nor is coughing required to transmit these particles. Simply breathing will do. Additionally, the study found that males shed influenza viruses in greater quantity than females through fine aerosols, and women cough more frequently. But what is most salient about the study was the following finding:

President Recep Tayyip Erdoğan has vowed that Turkish military operations in Syria will reach as far as the Iraqi border in order to clear the entire area of terrorists.

He said that when the Turkish-rebel coalition is successful in Afrin he will launch another offensive to dislodge the US-backed Kurdish militias from Manbij as well: “’Operation Olive Branch’ will continue until it reaches its goals. We will rid Manbij of terrorists, as was promised to us before. Our battles will continue until no terrorist is left right up to our border with Iraq“ 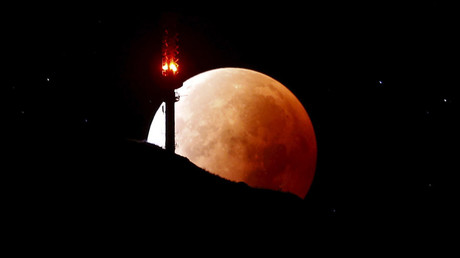 A rare confluence of a blue moon, a super moon, a blood moon and a total lunar eclipse is underway in the sky over parts of the US. It is the first one to occur in decades. 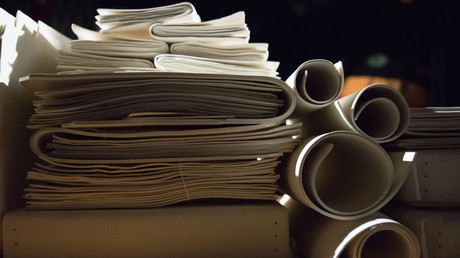 Canberra has launched an investigation into how hundreds of top-secret documents spanning five governments and dubbed The Cabinet Files ended up being sold at a second-hand furniture shop in the Australian capital.

Every day on the football field or the baseball diamond, kids and grownups give each other a high-five to celebrate the victory or a good play.

Welcome to America, Terrorists! Right This Way for Student Visas!

The study, which examined 355 volunteers who were sick with flu-like symptoms, found that people who previously received flu shots emitted sharply higher quantities of flu virus particles that can infect other people. From the study:

Fine-aerosol viral RNA was also positively associated with having influenza vaccination for both the current and prior season… We provide overwhelming evidence that humans generate infectious aerosols and quantitative data to improve mathematical models of transmission and public health interventions… Our observation of an association between repeated vaccination and increased viral aerosol generation demonstrated the power of our method, but needs confirmation. 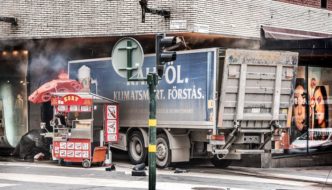 Sweden: Truck jihadi wanted to “create fear in the population” and “run over unbelievers”

“And prepare against them whatever you are able of power and of steeds of war by which you strike fear in the enemy of Allah and your enemy and others besides them whom you do not know, whom Allah knows.” (Qur’an 8:60) “Sweden charges man with terrorism over hijacked truck attack,” DW, January 30, 2018 […]

U.S. citizens urged to reconsider traveling to Cuba after US Citizens experience symptoms similar to those suffering by American diplomats after sonic attacks in Havana

Nineteen U.S. citizens who traveled to Cuba have reportedly experienced symptoms similar to those suffered by American diplomats in Havana, following a travel warning for the island last September. A…

The release of the memo regarding illegal FISA issued spy warrants on Candidate Trump and his staff should send Deep State servants to prison including Obama and Clinton. Now that the memo is being released, how far will the DOJ go in bringing the guilty to justice? How far will the Deep State go […]

Palestinian activists disrupt a meeting between members of an American economic delegation and the Head of the Bethlehem Chamber for Commerce and Industry in the West Bank town of Bethlehem on January 30, 2018. (AFP Photo/Musa Al-Shaer)

Speaking at an event marking the anniversary of the 1997 helicopter disaster, Eisenkot accuses the terror group of “violating UN Security Council resolutions,” namely by maintaining an armed presence in southern Lebanon, according to the Ynet news site.

He also says the IDF is “working day and night to ensure preparedness and deterrence against these threats.”

USGS
More than 400 after-shocks have rattled the Gulf Of Alaska after the powerful mag 7.9 rocked Kodiak Island on Tuesday with many of them significant and some in the mid 5 magnitude.
The huge earthquake of magnitude 8.2, reduced by USGS to a mag 7.9 struck 256 km (157 miles) southeast of Chiniak, Alaska at a depth of 10 km n Tuesday morning, see below.

With American west coast residents well aware a "big one" is guaranteed probably sooner rather than later Tuesdays massive quake came as quite a shock, especially as a tsunami warning, was issued for the entire west coast which turned out to be a glitch from data sent by an Alaskan buoy at station 46410.
On Friday morning the US West Coast rode their luck once again when a mag 5.8 – 173km struck W of Ferndale, California with a mag 5.0 after-shock, which could have been much worse.

"The Big One" is well overdue, according to Wikipedia, a study published in 2006 in the journal "Nature" found that the San Andreas fault has reached a sufficient stress level for an earthquake of

On Jan. 31, a total lunar eclipse will occur with a blue moon, known as a Super Blue Blood Moon. The eclipse will be at least partially visible across the United States starting early in the morning. (Click here for more details.)

By no stretch of the definition is a full moon rare. It happens approximately once a month, or every 29.5 days. Occasionally, it happens twice in one month, approximately every three years or so. This event is known as a Blue Moon, according to Fox 5 DC.

The Blood Moon occurs because the Earth is passing between the Moon and the Sun, which gives the Moon a reddish tint to it. It’s caused by light bending around the Earth because of gravity passing around a portion of the atmosphere, more commonly known as a lunar eclipse.

A Blue Moon combined with a Supermoon (when the Moon is at its closest point to Earth and appears to be 14 percent bigger and 30 percent brighter than normal) the rare phenomena is called a Super Blue Blood Moon happens. Supermoons generally only occur once every 14 months and will not happen again until January 2019.

The last time all of these events occurred simultaneously in the Western hemisphere was 1866.

ANNOYING CELEBRITY HYPOCRITES: Watch As The Grammy’s Goes Political And Musicians Contradict Themselves

WARNING STRONG LANGUAGE. PROCEED WITH CAUTION IF YOU ARE EASILY OFFENDED

Here comes another event where liberal celebrities get to tell you how you should live or think. Good thing that these shows are bigniing to crash and burn. The average American are tired of these relentless annoying hypocritical musicians and Hollywood elitists who believe that they are the moral voice of America. American viewers has shun the Grammy’s and in retaliation ratings have plunged 24% compared to last year. An all time low. Americans are sick of being lectured by tedious, annoying, out of touch, virtue signalling celebrities.

Transgender activists believe that feelings define people. And if our feelings are out-of-sync with our bodies, then our bodies must change–through any chemical or surgical means necessary, even if that person is a young child.

IDF spokesman Brig. Gen. Ronen Manelis warned in a op-ed on a Lebanese opposition website that a war could break out between the two countries if Iran and Hezbollah’s presences in the country continue to grow.

Beyond the crazy guilt-by-association stories, the debate over homeschooling boils down to this: Who is responsible for our kids’ education?