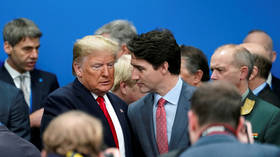 ‘He’s two-faced’: Trump strikes back at Trudeau after clip of NATO leaders mocking him (VIDEO)

US President Donald Trump described Justin Trudeau as “two-faced” after the Canadian leader was caught on camera with other NATO leaders apparently mocking Trump.