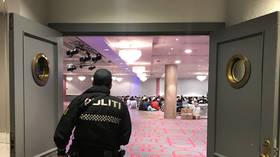 Group of Muslims beat & rob Christian street preacher in Norway, threaten to kill him if he does not convert to Islam

A Christian man preaching in the streets of a Norwegian city was beaten and robbed after being asked for spiritual healing by a group of Muslim men. He was also threatened with death if he did not convert to Islam.